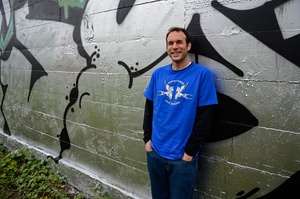 Bradley at the Holdout in Oakland. Photo: 2012.

Bradley Stuart Allen is a photographer who has contributed content to Santa Cruz Indymedia since 2001. He has widely covered protests, demonstrations, and other social movements in Santa Cruz and at UCSC, and his work has been featured in the Santa Cruz Sentinel, TWANAS, and Good Times.

Stuart attended UCSC and received a Bachelor's degree in Environmental Studies in 2002, and a Master's in Social Documentation in 2008.

Bradleystuart.net has served as an archive of his protest and politically-related photography work since 2005.

He became known as one of the Santa Cruz Eleven after photographing the 75 River occupation in 2011 for Santa Cruz Indymedia. An arrest warrant was issued for Stuart, and after a number of court appearances defending himself against felony charges, they were all dropped in May of 2012.