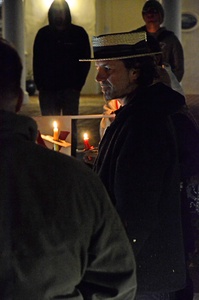 Brent Adams at an Occupy Santa Cruz rally in 2012.

Brent Adams is a musician, filmmaker, and a political activist.

He co-founded the band Love Gutter in 2005, and his film company is named Subcommondante Films. In 2012, Adams released his film documenting life at Occupy Santa Cruz.

Adams is also one of the Santa Cruz Eleven, a group of eleven individuals who were charged in relation to the occupation of a vacant bank in 2011 that demonstrators wanted to transform into a community center named 75 River.