People in Santa Cruz seem to be obsessed with plastering the backs of their cars with bumper stickers, many of them with an anti-war message or other liberal cause.

Santa Cruz Locals love to show how much they love Santa Cruz. Neighborhood names, landmarks, and "Locals Only" themes easily make up the majority of Santa Cruz stickers. 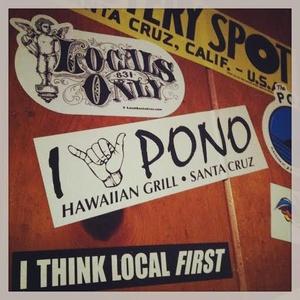 Most everyone in Santa Cruz will recognize one of Tim Ward's Santa Cruz typographic mermaids. 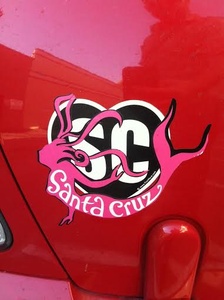 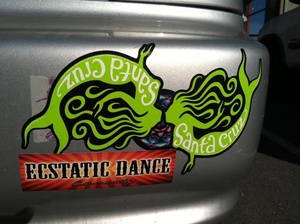 A Couple of Kissing Mermaids 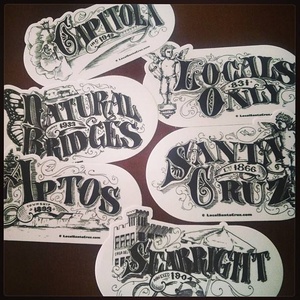 Stickers that show elements of Santa Cruz's history by using the Victorian style that was prominent in the founding of Santa Cruz.

With the political climate that UCSC has helped anchor in the very fiber of modern Santa Cruz life we have more than our fair share of political activists. Although the bumper sticker culture in Santa Cruz tends to lean left, many members of our community have something to say. From Vegan and Anti-Vegan to Shock and Irony, every aspect of the political spectrum is represented in Santa Cruz. 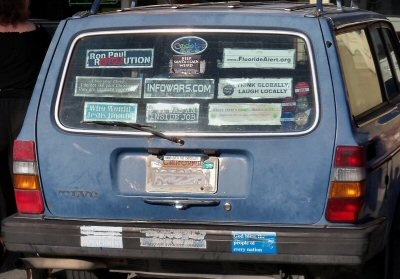 This car has enough stickers to obscure the view of the window. (It is legal as long as they have an outside mirror on each side.) 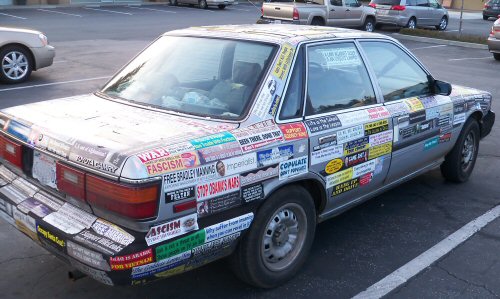 Thanks to some of the great entrepreneurs and motivated people in our community, the name "Santa Cruz" is an almost universally recognized brand. With companies like Santa Cruz Skateboards through artist Jim Phillips, creating icons like the Santa Cruz Red Dot and Screaming Hand. Add to the mix Santa Cruz Bicycles, and it is almost difficult to picture the "A"s in Santa Cruz as anything other than legless. These brands have helped take our community to a world-wide stage of name recognition, and as a result you will see thousands of their stickers throughout Santa Cruz. 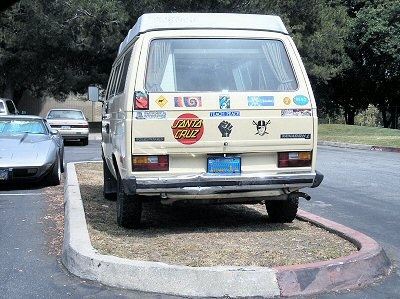 Parking with a message.

Some business in Santa Cruz have areas dedicated for local stickers. The Mens room at the Blue Lagoon, the front windows at Cole's BBQ and the front door at Chill Out Cafe are great examples of local businesses embracing and celebrating our community. There are other less embraced practices, like the stickering of newspaper boxes across town that fall more into the realm of vandalism that we as a community will have to continue to learn to deal with as a side effect of having such a creative and outgoing community. 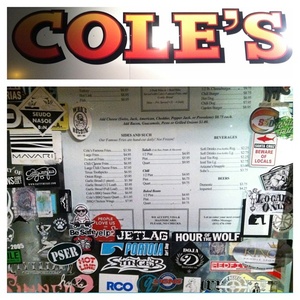 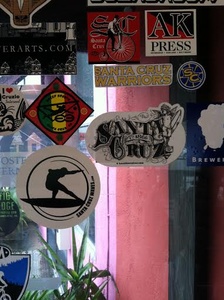 The front door at Firefly Coffee 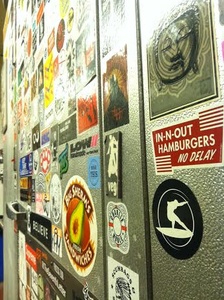 A walk in freezer covered in stickers