CALPIRG stands for California Public Interest Research Group. It is a statewide group that stands up against powerful interests and has a chapter at UCSC! CALPIRG has chapters in all the UC's (except Merced) and at USC. They work on issues like the New Voters Project, the National Student Campaign Against Hunger and Homelessness, and textbook affordability.

You can register to vote with them online here. 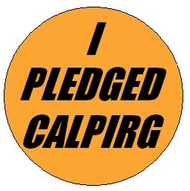 Because of support from students at Santa Cruz and other UC's through the pledge system CALPIRG has been able to achieve many successes for students accross the state and nation.

CALPIRG offers students internship credit for working on their campaigns and is always looking for interested folks!