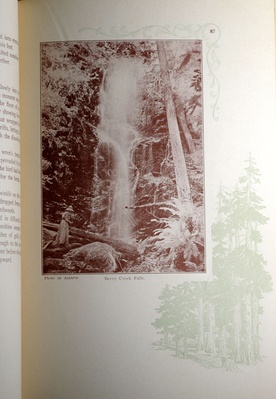 California Redwood Park features photos and early recollections of the "genesis" of Sempervirens Park/California Redwood Park, now known as Big Basin. It was written in part by Arthur A. Taylor, identified as Secretary of the California Redwood Park Commission. Other essays were contributed by Virginia Garland and Isabel McCracken. Included are early photos of Opal Creek, Sempervirens Creek, and Berry Creek Falls, as well as many references to place names more commonly referred to in the early part of the 20th cebntury, including Woodwardia Falls.