Perhaps one of the most confusing aspects of UC Santa Cruz for incoming freshies and transfer students is the bus system. Or rather, the two bus systems. So here's the breakdown.

The Santa Cruz Metro buses are the big blue buses that one frequently sees on campus and around town. These buses are not connected to the university, but part of your student fees goes toward paying for an "all-you-can-ride" pass for these buses, valid when you show your student ID card with a current sticker. (Current stickers are available at you colleges' main office.) If you are not a student or do not have your ID card with a valid sticker, the bus fare is $2.00, with no transfers allowed. Faculty members may purchase bus passes from the university at a reduced rate.

It should be noted that supposedly the university must pay for each individual ride you take on the bus, regardless if it's from Santa Cruz to Watsonville or from the Baytree Bookstore to Crown-Merrill. Therefore, you may see signs urging you to ride only the campus buses when riding from one part of campus to another.

Additionally, the Metro has used university students in several sneaky tactics in the past, once with the month-long bus strike (which wreaked havoc on many students' lives as they had no way to either get on or off campus) and again by starting a "campus-only" bus route, which served the purpose of the already-present campus buses, but additionally took away university transportation funds. 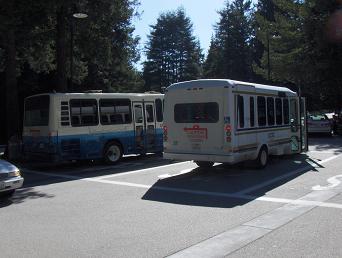 Campus Shuttles There are several campus shuttle routes, which often vary depending on the time of day.

The day shuttles run Monday thru Friday (usually excluding holidays and breaks), starting at about 7 am and ending at 6pm (when the night shuttle service picks up). Currently, there are 3 different shuttle routes- the Loop, the Core and Upper Campus. For a map of these routes, click here

The Loop is just that- it runs in a giant loop from the base of campus to the top of campus (Colleges 9 and 10) and to the base again, both clockwise and counter-clockwise.

For full maps and schedules, click here There are three main shuttles that run at night on campus, but they do not come very frequently. Sometimes it takes less time to walk across campus than to wait for a shuttle. It should also be noted that shuttles stop running around midnight. The Metro runs until about 2:30am on the weekends, but on weekdays makes its final rounds at about midnight as well.

For full map and schedule, click here Some people think that the Loop and the Perimeter are the same route just at different times of the day. However, these people are sorely mistaken and often only realize this when approaching the West remote parking lot, and discover that the perimeter shuttle does NOT go to the base of campus via the west side of campus. At this point people either get off the bus and wait for a metro bus to take them to the base, simply walk to the base (its a bit far and dark, though, and some places have no sidewalk), or they stay on the Perimeter shuttle and go all the way back around campus and finally make it to the Base via the East side of campus. The Perimeter leaves from the base of campus every ten minutes Monday thru Thursday (until 10 pm, then every 12 minutes), every twelve minutes on friday, and every eighteen minutes on the weekends. This is the only night shuttle route that goes to the base of campus.

For full map and schedule, click here The west core serves the west side of campus and the core of campus. This is the only shuttle that stops at the UCSC Trailer Park/north perimeter parking lot and traverses the inside road of Kresge and Porter College. The shuttle travels clockwise ONLY. This shuttle does not go to the base of campus. The shuttle runs in 30-minute intervals, and thus isn't very convenient.

For full map and schedule, click here The east core serves the east side of campus and the east remote parking lot. This is the only shuttle that serves the inside of The Village. It travels counterclockwise ONLY and does not go to the base of campus. Like the west core, the east core runs in 30-minute intervals.

These are buses hired by the university to take students to Southern California for the holidays. Students must pay individually and must reserve spots in advance.

The bike trailer and shuttle will take you and your bike (not just you) in the morning to campus for free! The shuttle runs year round from Olive Street next to Mission near CVS pharmacy, and during the school year from 611 Ocean Street near Water and Dakota. You can find their schedule here.