Left shows the beach in winter. Right is the same beach in summer. Photos courtesy of John Pilge.

Starting below the cliffs just south of Pleasure Point, Capitola Beach extends to the end of Esplanade. It includes the Capitola Wharf and where Soquel Creek enters the sea. Most of the events at the Beach, are along Esplanade. This part of Capitola is called Capitola Village or just, "The Village" by locals.

The Capitola Beach is a popular place to spend a warm day. There are latrines and a shower for swimmers.

This area of Capitola started as a camping site for vacationers. There are many stories of how Capitola might have gotten the name. It might have been named for a character in a series of romantic novels.

In the Alfred Hitchcock movie, "The Birds" there is a telling of a story where seagulls started crashing into the city of Capitola on a foggy day in summer. The event really happened here in 1961. 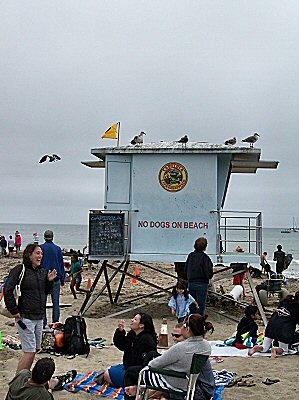 As this guard station shows, dogs are not allowed on the beach. All of the businesses on the Beach side of Esplanade are places to eat.

Many activities are scheduled on or near the Capitola Beach. In December there is the Christmas Parade in Capitola. Santa Clause arrives on his surf board, landing on Capitola Beach. (Some years he sends one of Santa's helpers. But don't tell the kids, they might be disappointed.) Summer time you will find art fairs on the Esplanade, the road nearest the beach. There are sand castle contests on the beach, and swimming events in the bay. There are also free open air concerts near the beach in summer.

As a practical matter, it is better to walk to the beach. There is all-day metered parking off of Bay Avenue near the railroad crossing. Parking within two blocks of the beach has a cost of about 10 minutes for each quarter and the meter is good for only two hours. After the first two hours you can get a ticket even if you re-fill the meter. Between Thanksgiving and Christmas, MOST (not all) metered parking in the Capitola Beach area is free. IF the meter is uncovered, feed it coins. Parking is enforced 8am to 8pm. The meters accept quarters, dimes, and nickels.

Santa Cruz Metro Transit Route 54 gets within two blocks of the Capitola Beach, and visits Capitola Mall that has free parking. During special events there is bus service from the Nob Hill Foods parking lot on Bay Avenue to the events near Capitola Beach. (It is about a one-and-a-half mile walk.)