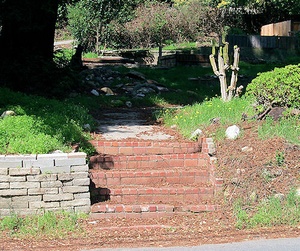 These steps lead to the property where Club Zayante once stood.

Club Zayante was established when owner Tom Louagie bought a country club in Zayante that had been built in the 1920s and had sat vacant for 5 years. For the first year, Louagie operated the business as it had been before he bought it, which included putting on wild west parties and family nights. Louagie eventually had the idea to bring musical performances to the club, and playing regurlaly in the early days were locals Jill Croston (Lacy J Dalton) and Bob Brozman. National acts who played there included Ramblin' Jack Elliot, Hot Tuna, Neil Young, John Lee Hooker, and Albert Collins. The scene at the club became more and more wild, with nude swimming at the pool. In 2006 the club burned down and Tom Louagie, who still lived on the property and rented out rooms, was burned severely.

I recall visiting Club Zayante once, probably in 1975, back in my pool-playing days.  After a long wait for my turn at the table, I finally could use my skills to win.  Then a funny thing happened -- some guy, called Ace, stepped up to the table, although it wasn't his turn, but he apparently was someone to reckon with.  Well, I broke the rack, making the eight ball.  He was allowed to rack again, and the results were the same.  He did it one more time, and so did I.  I used different breaks each time.  Finally, on the fourth rack, instead of attempting another 8-ball pocketing, I called the head ball (the 1-ball) in the left side pocket.  I executed that shot to perfection (and a bit of luck).  We then played a regular game, and I probably lost, as all I remember then is going out to the pool and having a nice cooling nude swim.  Ah, the good old days ...