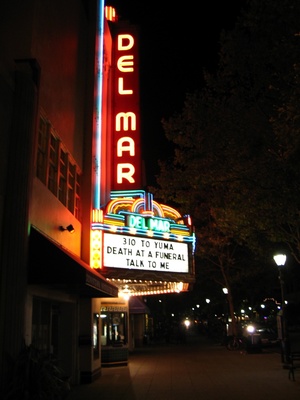 The Del Mar Theater is an old fashioned movie theater with history on Pacific Avenue. In addition to showing great foreign and independent films, they do some cool midnight movies every weekend.  It is currently operated by Landmark Theatres.

The plaque on the building says: "Booming theatre business in Santa Cruz led the Golden State Theatre chain to replace the 700-seat Unique with the 1,500-seat Del Mar in 1936. The movie palace was a flagship of the chain, with a stage and 25 piece orchestra pit for vaudeville acts and conventions. From his Del Mar Offices Barney Gurnette also managed the New Santa Cruz and Rio theatres. Live Del Mar shows continued into the 1970's with concerts by Lionel Hamption, Duke Ellington, Jerry Garcia, Tom Waits, Emmylou Harris, and the Tubes. When a Chamber of Commerce bid failed to purchase the theatre, United Artists partitioned it into a four-plex in 1978. 1999 plans to convert it to shops and offices were stopped when a coalition was formed to save the theatre in 2001. The city redevelopment agency purchased the theatre, installed an elevator, and made the facility thoroughly accessible for the disabled. Jesse Nickell of Barry Swenson Builder and George Ow Jr. renovated the structure and main auditorium, and the Nickelodeon's Jim Schwwenterley and Chuck Volwiler outfitted it for movies." 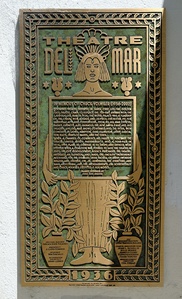 The plaque was designed by Ross Eric Gibson.