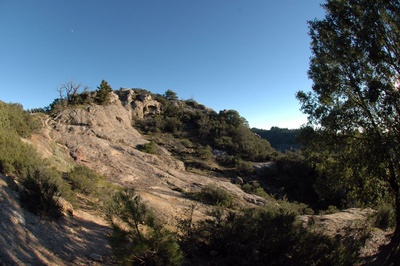 Eagle Rock At an elevation of 2488 ft, Eagle Rock is the highest peak in its neighborhood, which includes Buzzard's Roost and Pine Mountain. Eagle Rock sits on Ben Lomond Mountain, is located in Little Basin, and offers a 360 degree panorama, which includes views of the surrounding mountains and many discernible features of Big Basin Redwoods State Park, as well as a glimpse of the ocean. On some maps it is identified as Eagle Peak, Eagle Rock Peak, or Campbell Peak.

Eagle Rock Trail is a single track trail located mostly within the boundaries of Little Basin.

Little Basin State Park is not a day-use facility and cannot be used for parking for this trail.

An example of Tafoni on Eagle Rock

The fire lookout was a California Division of Forestry lookout, but was boarded up for years.

In 2007, Hewlett-Packard transferred ownership of Little Basin to the Peninsula Open Space Trust and the Sempervirens Fund.

Eagle Rock can be reached by taking the Eagle Rock Trail, listed on the current Little Basin trail map as a difficult 3.5 mile round trip hike.