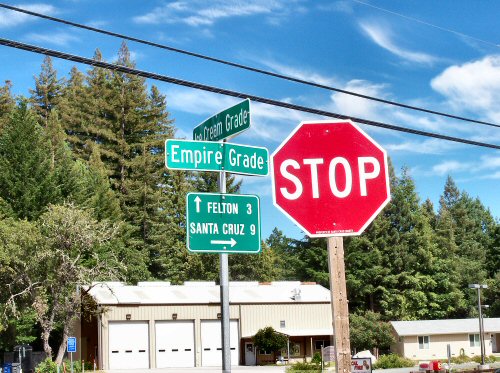 Empire Grade goes up Ben Lomond Mountain on the ridgeline between the Coast Road and the San Lorenzo Valley. The name "Empire" is from a mining company, which operated during the 1850s. The term "grade" was used for steep roads in the area. This road was constructed, in 1872. Older maps show it extending more than 30 miles. The present road starts where High Street changes names after the western entrance to UCSC. It extends about 15 miles, ending near Eagle Rock.

There are bike lanes running from the road's beginning at the Bay Street intersection to the traffic light at Heller Drive (UCSC West Entrance), but soon after the bike lane ends and the street becomes narrow with no shoulder. Traffic is fairly sparse and generally considerate to cyclists. It is hilly and can get steep in some places, notably on the stretch leading up to Santa Cruz Waldorf School and in multiple places north of the Smith Grade intersection. Most of it is paved.

In June of 2011, 25-year-old Zachary Parke was killed in a hit-and-run while cycling on Empire Grade down from UCSC campus. The person driving the car that hit him was found and arrested a few days later. Sentinel Article