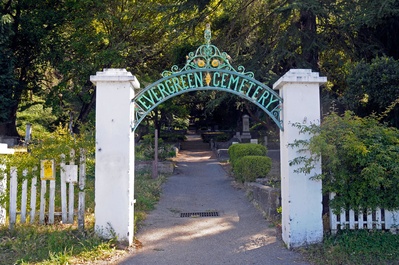 Evergreen Cemetery is located on a forested hillside next to Harvey West Park and it contains the gravesites of many of Santa Cruz's earliest 'pioneers'. It is operated as a park by the Museum of Art and History, and people use it more as a park than as a traditional cemetery, hiking up the trails and enjoying the woods.

Evergreen was established in 1850 and contains many grave sites from the 19th century, but gravestones of people who passed away as recently as the 1980s and 1990s are present, as well as the names and birth dates of some individuals who have not passed yet in spaces reserved for them.

The Cemetery is divided into separate sections, which include the Masonic Section, the Grand Army of the Republic plot (Civil War Veterans), the old section (a 'potter's field' which was for people who could not afford a grave site), the Chinese area, private burial areas, and the 'Extension' which was added in the 1940s. Residents buried at the cemetery include Louden Nelson.

The trails in the park are single track and include the Elk Path, which begins at the cemetery's main gate and travels left and right, parallel to Evergreen Street and the Glory Path which goes up the hill. Both trails are less than a quarter mile long. The Elk Path is level and easy to walk, and the Glory Path is short, but it gets steep near the top. It also has steps, so it is not wheelchair accessible. 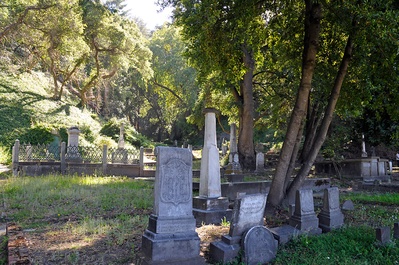 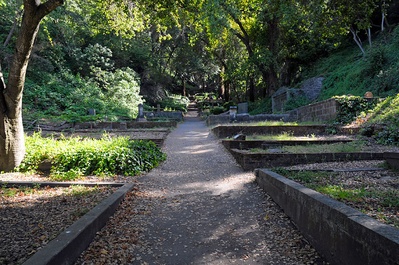 The cemetery is considered important enough to have signs saying "Point of Historical Interest." The signs are on River Street and point to Fern Street. There are no other signs showing the way. Drivers have to turn west on Fern Street then turn south at Limekiln Street, and follow the road as it changes to Coral Street and leads to Evergreen Street.