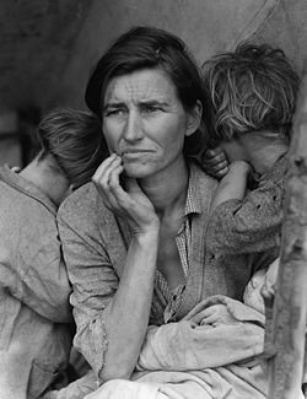 The famous Migrant Mother image. Florence Owens Thompson with two of her daughters.

Summary Florence Owens Thompson - Born Florence Leona Christie on September 1, 1903. Florence Thompson was the subject of a Dorothea Lange photo in 1936 often called "Migrant Mother." The Library of Congress entitled the Migrant Mother image, Destitute pea pickers in California. Mother of seven children. Age thirty-two. Nipomo, California. In 1998, the Migrant Mother photo became a 32-cent U.S. Postal Service stamp in the 1930s Celebrate the Century series. This was one of the few times, living people (the daughters Katherine McIntosh and Norma Rydlewski) were put onto a US Postal stamp. Lange was funded by the federal government when she took the picture, so the image was in the public domain and Lange never received any royalties. Dorethea Lang died in 1965. In November 2002, Dorothea Lange's personal print of Migrant Mother sold at Christie's New York for $141,500.

Biography Florence Thompson was one of many people photographed by Dorothea Lange during the depression. Lange sent the images to the San Francisco News as well as to the Resettlement Administration in Washington, D.C. The San Francisco News ran the pictures with an claim that at least 2,500 migrant workers were starving in Nipomo, California. Within days, the labor camp received 20,000 pounds of food from the federal government. However, Thompson and her family had moved on by the time the food arrived and were working near Watsonville, California. The name of the person in the famous photo remained largely unknown until a story in the Modesto Bee in 1978, discovered it was Florence Thompson.

Thompson claimed that Lange never asked her any questions and got many of the details incorrect.

Florence Thompson died in Scotts Valley in 1983. She was buried next to her husband George, in Lakewood Memorial Park, in Hughson, California. In 2009, according to one of the staff at the cemetery, the grave site gets one visitor a month. Their are two people named Florence Thompson buried at Lakewood Memorial Park. The grave site for the migrant mother is Florence Leona Thompson. 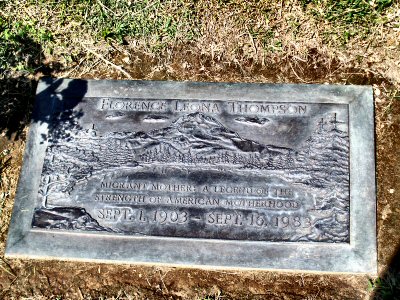