The Front Street Pub (also known as the "Santa Cruz Brewing Co.") was the first micro-brewery and pub in central California since Prohibition. 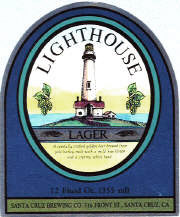