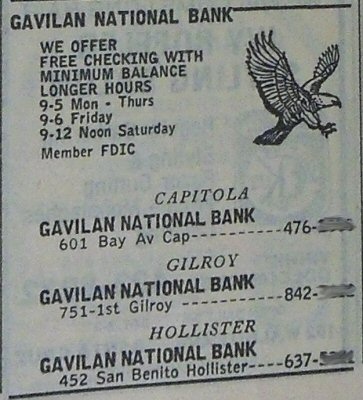 Started in 1972, in Gilroy, California, Gavilan Bank had seven branches. Two of the branches were in Santa Cruz County. The Capitola location was first. The name "Gavilan" means hawk in Spanish. It was likely named for the Gavilan Mountains. In 1981 Gavilan Bank was acquired by First Interstate Bank.

You can see a former branch of Gavilan as it looks in 2012 at Former Bank Buildings.