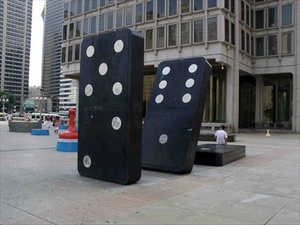 In 1977 there were several fiberglass sculptures of eight foot tall, black dominoes placed throughout Santa Cruz County. One was at the north end of Encinal St. up on the grassy hill, near Pogonip. Another was in the play field of Live Oak Elementary School. It was on the north side next to the chain link fence and could be seen from Capitola Rd. One was on the Pacific Garden Mall, and others were placed at various sites in the county. The sculptor was Jonathon Apples and his exhibits were called, "Standing Dominoes". He was an admirer of Christo's sculptural work and aspired to do the same. The giant dominoes remained in place until some time in the 1980s.

From Santa Cruz Sentinel February 18, 1977: "Apples didn't pick this shape because it was his favorite childhood game. He perceives it as a cultural symbol of America in the 1960s and '70s, a period remembered for the infamous 'Domino' theory of foreign policy."