Harvey West Boulevard starts at Coral Street and goes 0.4 miles west. Harvey West developed the bordering land and donated it to the city as a park. The street and the park are named in his honor. 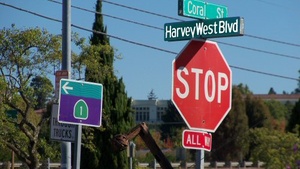 Street is level and has no bike lanes. Traffic is light. It is one of the entrances to the Costco parking lot.

Bus Stop on nearby Coral Street and on Harvey West Boulevard.