It is popular with bicyclists. There are no bike lanes.

No bus stops on King Street. There are Bus stops on Bay Street and Mission Street. 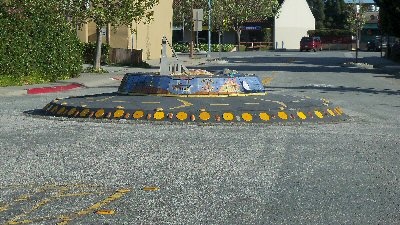 This traffic circle art display is used to slow traffic at an intersection on King Street.

There was an effort in the 1970's to get the name of King Street changed to King Junior Street. Efforts were made to discover for whom the street was named. There were many candidates; from as an early pioneer to a city worker. No evidence was found to support any claim. The effort to change the name of the street failed because not enough property owners along the street would agree. The effort was to honor a man who had never visited Santa Cruz.

It is mostly residential.