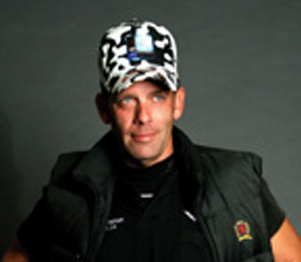 Kirby Scudder is an artist who helped craft the papier mache cows known as KowHaus for the Tannery Arts Center, he coordinated a group of artists for the building of a scale replica, from photos, of the Downtown, and was the organizer of the Night Light event on West Cliff Drive in Santa Cruz. He also serves as the director of the Santa Cruz Institute of Contemporary Arts and has been involved in the opening of several local art galleries, including the Question Mark Gallery, the Mill Gallery, the Hide Gallery, and the Dead Cow Gallery.

2008-11-05 03:14:30   Few people are aware how dangerous this man can be with a pool cue in hand. Taking the Golden Stick for the last eight years in a row, ESPN2 called Scudder a "maverick both over <i>and<i/> under the table." When he's not pocketing balls PRO-AM, Scudder fills in on air-guitar for Keith Richards. Known only as the Shadow these days, Kirby can been heard but never seen. Contacting him for comment proved tedious and dull, but there was nothing better on TV that day so we decided to give it a shot. "If this sounds like the work of Dalas," said Scudder, doing his best Al Pacino via walkie-talkie, "I don't want no part of it. This guy! He shoots first, then asks questions later." —76.254.85.54