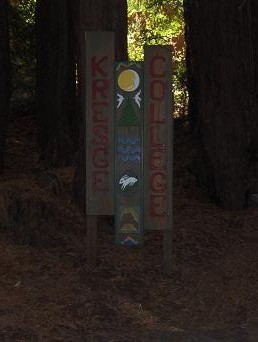 Kresge College, founded in 1971, has the distinctive feature of housing all of its residential students in apartments rather than dormitories. It is located at the Northwest edge of the developed UCSC campus, and surrounded by redwood trees.

Kresge has a reputation for a fiercely liberal and countercultural student body. Undoubtedly the apartment-style housing attracts those seeking an alternative to the mainstream college experience. Apparently Kresge has attempted to declare its independence from the rest of the University on multiple occasions.

Kresge was originally endowed by the Kresge Foundation, but it's rumored (a future editor of this article may wish to confirm this) that the endowment was withdrawn when the students refused to take down their infamous "naked man" sculpture which raised eyebrows at the foundation.

The recent requirement of a significant meal plan for all students living on campus has eroded one of the major advantages Kresge has over other colleges: a kitchen in every unit. This change was met with major controversy at Kresge. 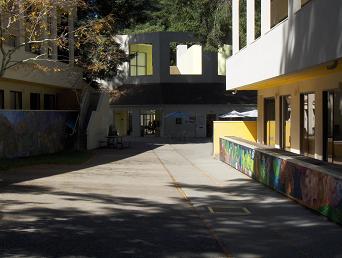 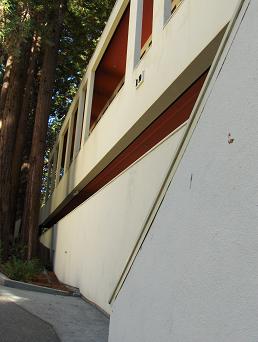 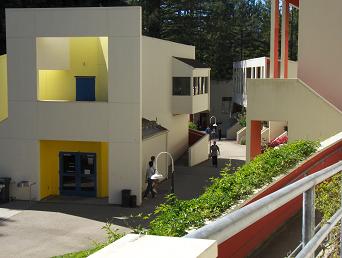 Flats and Laundry Room There are four primary types of apartments at Kresge. The "suites" are located at Kresge Proper (across the bridge from Heller Dr.) and each houses typically 7-8 students. They are a mix of single rooms and double rooms, and are one of the best places for frosh to get single rooms on campus. Depending on whether a suite building has been remodeled, it may have an actual enclosed bathroom or use the hallway between the rooms as a dorm-style bathroom with stalls. The "flats" at Kresge proper are the other major housing option for first year students. They typically have one double room and one triple room which was converted from a double room.

Kresge East is on Heller Dr, across a ravine from the rest of Kresge. These apartments are composed of four single rooms, and have a relatively high amount of common room and storage space. Kresge East is much less dense than Proper and it's a quieter area. Traditionally these apartments were reserved for continuing and transfer students, but some were used for freshman housing at least in the 2004-2005 academic year.

The newest apartments are the Porter/Kresge apartments. The ones closer to Kresge, which are available to continuing and transfer students affiliated with Kresge, have two single rooms connected to a common area and kitchen. One of the disadvantages of this type of apartment is that they can only be accessed through hallways which are locked at night. This may be good for security, but it lacks the social openness of the rest of Kresge.

There are also a few "triplet" apartments with a single room and a double room. With multiple stories, these apartments have enviable room in the common areas.

Some apartments are co-ed and some are single-sex.

Food at Kresge can be found at The Owl's Nest and at the Kresge Food Co-Op, but the Porter/Kresge Dining Hall is located at Porter College. 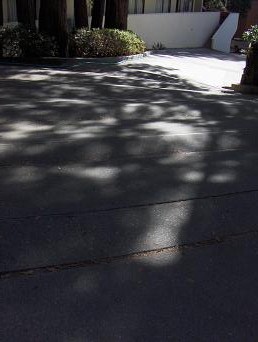 The Infamous Acid Steps The Kresge Town Hall is the largest lecture hall at Kresge. It is used to host regularly-scheduled classes as well as special events.

The Piazzetta provides an outdoor location for studying and enjoying nice days. It is located next to the college office and mail room.

Kresge is home to many community oriented groups, including the Kresge Food Co-Op.

Kresge offers several recreational facilities to its residents. There is a recreation room with a pool table, and a little-known raquetball court. Kresge has a photographic darkroom available for those who still use film cameras.

The Kresge core course, Power and Representation, focuses on pivotal moments in 20th century American history. The primary subjects are the atomic age and the social movements of the 20th century, including the civil rights, women's rights, and gay rights movements.