The county of Santa Cruz had many work camps, vacation spas, and settlements over the years. As long as a settlement has some commerce, a store, a post office as well as dwellings, it will show up on old maps as a town. As maps get updated, they often include old information. Unless a settlement actually incorporates as a town, tracing the actual start and end of a settlement is difficult. The settlement of Amesti (near Pinto Lake) was started before the area was called Santa Cruz County. Today it survives as a census designated place. It was never considered a town.

Railroad Stops
Often a town will grow around a railroad stop. Sometimes  it will only be a spa or resort. (Resorts include New Brighton and Olive Springs.)  The following railroad stops are often confused as towns. Some had a post office for a short time.  None are still active, yet can be found on older maps.


The settlements on this page do not include labor camps such as Olympia and Petroleum.  These towns are not "lost" in the traditional sense. Their former locations have been mapped. In most cases, the original structures are gone. 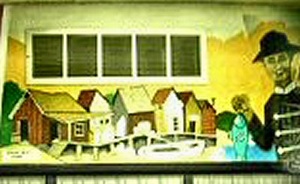 A colorful version of China Beach on the Soquel Post Office Mural.China Beach (China Cove)
Location: New Brighton State Beach.
A settlement of Chinese fisherman. Started in the 1870's. Abandoned by 1890. Accounts mention it was shacks of driftwood and scrap lumber. Those who lived there had other names for the settlement. Quen (QUE-un) is one possible name. There is a historic marker above the beach for this settlement.

Chittenden
Location:The Santa Cruz County side of the Pajaro River near Aromas.
Post office started there in 1893, but the settlement was earlier. Post Office closed in 1923. The railroad station closed in 1942.


Colache Town
The name of a neighborhood in Watsonville around Seventh, Eighth and Ninth Streets. There were many cultures located in the small neighborhood. Colache is a type of stew common in Mexico.  It was an unofficial name for the area, yet it still appears on some maps.

Davenport Landing
Location: Where Agua Puera Creek meets the ocean. (See Davenport Landing for details.) It was a settlement and a port area. It had a Post Office from 1874 to 1889. Most of the village was destroyed by a fire in 1915.

Glen Arbor
Location: centered near Highway 9 and Glen Arbor Road.  Glen Arbor was a settlement and railroad stop.
It had a post office between 1914-1915.

Laurel (Originally named Highland)
Location:  Off of Laurel Road between Redwood Lodge Road and Schulties Road. This settlement became Laurel in 1877 when the railroad was built in the area.   The completion of the Summit Tunnel (also called Wrights Tunnel) in May 1880 made it ideal as a railroad repair station.  Laurel had it's own school from 1882-1947. It had a post office from 1882-1953.

Lorenzo
Location: South of Boulder Creek
Founded in 1875 by Joseph Peery. The post office closed in 1877. The settlement was absorbed into Boulder Creek.

Swanton
Location: Swanton Road north of Davenport.
Formerly named Laural Grove. It was a stage coach stop. In 1906 it became the northernmost stop of the Ocean Shore Railroad. It had a post office from 1897 to 1930.

Trancas
Location: On Archibald Creek at Swanton Road.  Active in 1897. Found on a map dated 1949.

Valencia
Location: On Valencia Road near Aptos.
Established in the 1880's. Post office started 1893 and ended in 1909.  The building that was once used as a post office is still there as part of Valencia Hall County Park. There was still industry in the area in the 1930's.  Seen on road maps as late as 1945.

Villa de Branciforte
Location: The east bank of the San Lorenzo River. Around Ocean Street in Santa Cruz.
Began in 1798, it was a small village through all if it's history. Incorporated into Santa Cruz in 1905.

Waddell
Location: Where Waddell Creek meets the ocean.
The settlement had a sawmill and an ocean pier. It had a post office from 1890 to 1891.
Government records show the post office being 3 miles from the sea. Waddell was found on a map of 1873 and other maps to 1907.