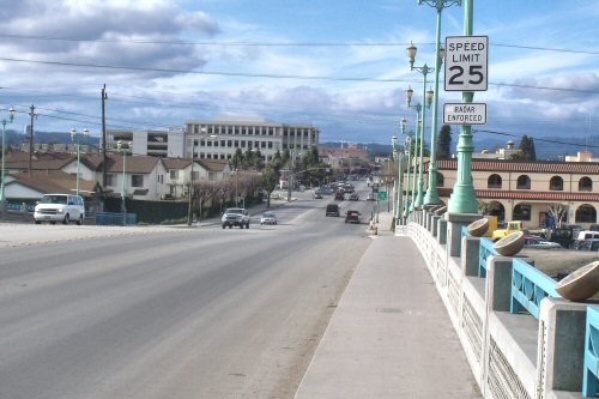 Main Street in Watsonville from the bridge over the Pajaro River. Photo: 2/20/2010

With the construction of the shopping areas west of Ramsey Park, many locals refer to the area as "New Main" and the area of downtown as "Old Main."

For most streets of Watsonville with East/West in the name, Main Street is often the dividing line for the change. (Example: East/West Beach Streets.)

3. In Ben Lomond, Main Street runs north from Mills Street to Sunnyside Avenue and continues for about 120 yards afterwards.

The connection between Main Street in Watsonville to the town of Pajaro was once a ferry crossing. In 1868 John Heerandner (he was called, "Dutch John") built a toll bridge at that location. It opened on Thanksgiving day and three weeks later was ruined by a flood. He re-built the bridge doing much of the work himself. A few months later, the counties of Monterey and Santa Cruz purchased the bridge and eliminated the toll.

Main Steet in Watsonville can be found on the following USGS maps.