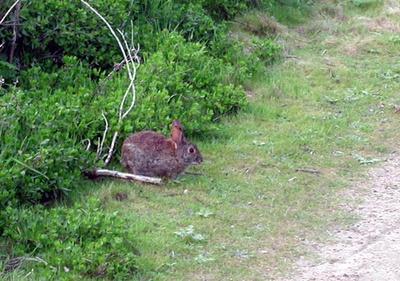 A Rabbit on the trail in Wilder Ranch State Park

This page is about mammals in the Santa Cruz region.

Yes, bats are in fact mammals.  Bats are nocturnal critters that hang out in the more rural areas of Santa Cruz County.   There are 12 common species of bats in Santa Cruz.  Though many people consider bats pests, they are in fact very beneficial.  Some bat species can eat up to 1,000 pesty insects an hour.

For the most part, the bats in the area are much like those anywhere else— nocturnal and pretty inconspicuous. you may never even see or run into one while living in the area, and if you do, it is probably because it is injured and unable to fly. If you happen to run across one, don't touch it, as bats can bite and can sometimes carry rabies.

Bobcats are large cats about the size of a medium-sized dog (bobcat kittens are approximately the size of a housecat). They usually have a light brown fur coat which it speckled with black spots. One of the most prominent and noticeable features is the dark tufts of fur at the tips of the bobcat's ears. Bobcats have short tails.

Bobcats exist on the UCSC campus, especially in th village housing community. They are more commonly seen than mountain lions, but but may be mistaken for one from afar. However, bobcats are much smaller than mountain lions, have a different coat coloration, and have a much shorter tail. (For help differentiating between bobcats and mountain lions, click here.) Like most wild animals, bobcats prefer not to be bothered by humans. They tend to hunt small prey like squirrels and rabbits, and only rarely hunt larger animals, like deer. Many of the bobcats on campus seem indifferent to humans. Basically, don't bother them and they won't bother you, but they're not much of a threat to humans, anyway. Your housepets, on the other hand, are a different matter. If your cat somehow ends up in the great meadow, it is literally "fair game" for the bobcats. This also goes for dogs — this is why dogs are not allowed on the campus. 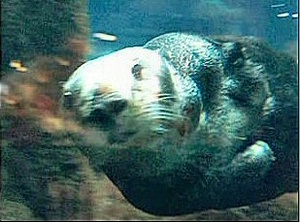 IF you find a stranded sea otter on land, do not touch it. Those cute adorable critters will bite. It is also illegal to touch them. Do not wrap them in a blanket. This can cause them to overheat. In Monterey Bay you can call the 24-hour sea otter hotline at (831) 648-4840 and the Monterey Bay Aquarium staff will take action. Sources / Resources Monterey Bay Aquarium 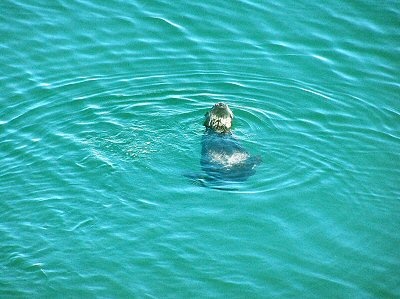 Typical view of a sea otter. (Photo by John Pilge.)

Description The adult California sea otter (Enhydra lutris nereis) weighs between 30 to 100 pounds. They are among the smallest marine mammal. Until a ban on hunting sea otters in 1911, they were prized for the thick fur. Some estimate the population is almost two-thirds of their former numbers. The sea otter eats smaller prey. They eat sea urchins, fish, and mollusks. They eat abalone, which would be otherwise a prized catch for humans. Sea otters eat about 13 pounds of food a day.

They are still on the endangered species list. They live near shore, they are often found near rivers that flow into the sea. They are more common to Monterey than Santa Cruz. 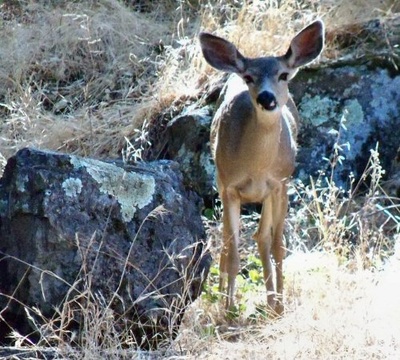 Little dear may look harmless but if you get too close mommy dear may come and charge at you. (Photo by John Pilge) Description

Deer are commonly found on the UCSC campus throughout the day, though they seem to prefer to come out at dawn and dusk. They tend to be skittish and will often flee when approached, but wild animals in general are difficult to predict and should not be intentionally harassed by humans. However, the deer in Santa Cruz are noticeably more used to humans than deer in other places, and will often simply stare at an approaching human or continue nibbling on whatever grassy snack it's currently eating. Many allow for humans to get quite close before appearing threatened. Don't try to touch them, though, since that's just asking for trouble.

Santa Cruz is considered a "declared rabies area," so don't touch or handle any wild animal, even if it appears sick. However, the largest threat to humans by deer is probably the fact that some of them can jump over the fences separating the meadows and the roads (especially on Hagar Drive on the east side of campus), and drivers should be aware of this. Also, they can get pretty feisty during mating season (Marylieth was nearly trampled by a deer in early 2007 near Social Sciences 1 during what appeared to be a heated chase for some booty). Gardeners and groundskeepers on campus also have problems with deer since they like to eat lots of different types of plants.

There are several animals called gophers. (Ground squirrels, prairie dogs, etc.) The pocket gopher (family Geomyidae) is often called the true gopher and they have made a home in Santa Cruz County. Because their habits of digging, they are considered pests. The tunnels can disrupt agriculture plants, gardens, landscaping and even underground cables. Gophers have a typical lifespan of three years. 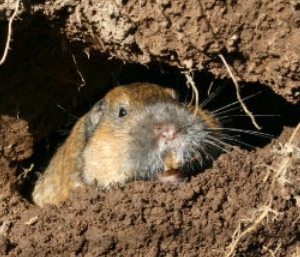 Gopher holes can be seen along the coast near Lighthouse Field, Depot Park and along the banks of the San Lorenzo River. Their tunneling will contribute to erosion and become home to snakes. Gophers can either be poisoned or trapped. Devices intending to scare gophers, don't usually work.  Gopher towns can number in the hundreds. 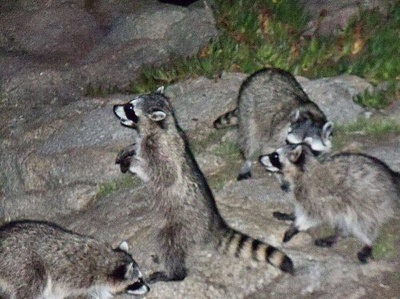 Raccoons (Procyon lotor) can be destructive in urban areas. Description Raccoons produce one litter per year. The average litter size is 3 to 5 young. The offspring are weaned between 2 and 4 months of age and usually stay with the female until the following spring. Raccoons are scavengers and will eat almost anything. Raccoons will eat berries, fish, fruit, eggs, grain, insects, poultry, mollusks, nuts, rodents, vegetables, pet food and garbage. Raccoons have been known to kill birds (such as chickens) and eat crops. Raccoons do not always wash their food before eating, although they often play with their food in water. Mostly associated with forests, raccoons also roam beach areas, and have been seen within the city of Santa Cruz.

Living With Raccoons Raccoons are cute. Some have been domesticated, but raccoons do not make good pets. They have sharp teeth and claws. Raccoons are nocturnal, they will kill small animals, and will attack if you interfere with their food. Raccoons have been known to make homes in attics, under piers, and under houses. Raccoons in the wild can transmit a number of diseases.  It is never a good idea to feed a wild animal. For raccoons, if you toss food at a group they will attack each other trying to get at the food. Even in families, they do not share.

In California the chipmunks and gray squirrels are native. Typically, these are ground squirrels that nest in the ground near water. The fox squirrels have been introduced to California and they are typically tree squirrels. Neither like to nest in a redwood tree. Especially if the first branch is more than 10 meters up. Squirrels find attics an attractive alternative for nesting.

Squirrels eat eucalyptus seeds, insects, acorns and virtually any crop grown in Santa Cruz County. Squirrels are well adapts at digging holes and chewing through wood. Squirrel are of the genus Sciurus, and are rodents. 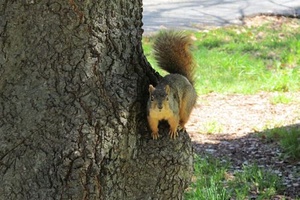 This charming squirrel enjoys the trees in Watsonville. (Photo by John Pilge)