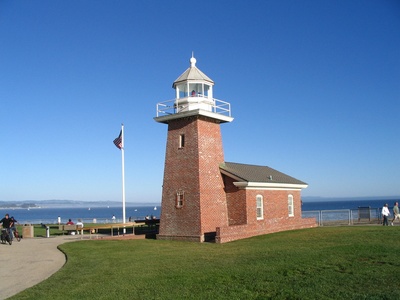 Statehood and the wave of prospectors during the gold-rush dictated the construction of California's twelfth lighthouse. The first west coast railroad wasn't finished until 1869 and the large scale movement of men and materials during the intervening years took place by sea. The original lighthouse, completed in 1869, was a two-story frame house with the Fresnel lens located in a wooden cupola on the roof. This lens was invented in 1822. This lens was produced in Paris during the reign of Napoleon I.

In March 1879 and 1881 the building was moved inland because new sea caves were forming under the cliffs and there was concern for the safety of the structure. It remained in this new position until 1939 when all U.S. lighthouses were taken over by the Coast Guard. At that time the beacon was put on an automatic timer and placed on a wooden framework tower in front of the house. The house itself was sold for scrapwood to a carpenter in 1948.

The lighthouse as it stands today owes its existence to Chuck and Esther Abbott. Santa Cruz remains indebted to these nationally known photographers who sponsored the building of the modern lighthouse in memory of their son Mark, killed in a surfing accident. The lighthouse is home to California's first surfing museum and is the location each Christmas for "Caroling Under the Stars," a Santa Cruz tradition which attracts hundreds of locals and visitors alike.

—-above text copied from http://www.ci.santa-cruz.ca.us/pr/parksrec/parks/light.html