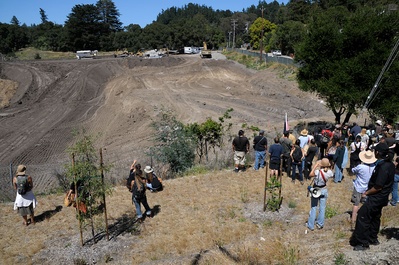 Market Street Field during the March to Protect the Ancestors, August 14, 2011.

For years, locals have known the site to be a former Ohlone village, and also as a contemporary gathering site for Native Americans into the 20th century. Today, Market Street Field continues to be visited by people who seek to gather medicinal herbs, and by a variety of other people interested in Ohlone culture. Due to the possibility of disturbing this history, the commercial development of Market Street Field traditionally has been avoided, until KB Home decided to build on the site. Despite the statement in 2007 from a Planning Commissioner from the City of Santa Cruz that Market Street Field was, "the oldest and most significant cultural area in the City,"1 the plan to build was approved.

On August 2, 2011 during construction by KB Home the remains of a 6000 year old Ohlone child were unearthed. The remains are now in the posession of the California Native American Heritage Commission, which believes that Ann Marie Sayers of Hollister is the "Most Likely Descendant." Sayers called for all earth moving at the site to be halted, and area residents quickly formed the group the Save the Knoll Coalition, which organized a series of meetings and protests with the goal of protecting the burial site and Ohlone village which began with the March to Protect the Ancestors (a protest and march from Pacific Avenue to Market Street Field) on August 14, 2011. 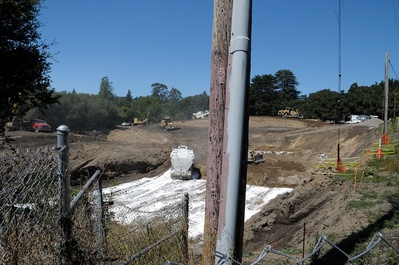 Construction at Market Street Field by KB Home on August 22, 2011.