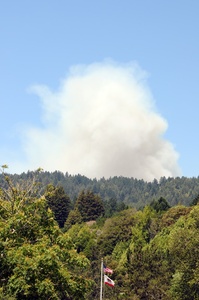 Day two of the fire, as seen from the post office in Felton.

Less than three weeks after the massive Summit Fire, another big fire hit the Santa Cruz Mountains, this time in Bonny Doon. At about 3:30 pm on June 11, 2008, fire broke out on the 1400 block of Martin Road. Dubbed the Martin Fire or the Bonny Doon Fire, it quickly grew to 400 acres in size and spread into Bonny Doon Ecological Reserve. The winds weren't as high as they were during the Summit Fire, but the humidity was extremely low, the temperature was high, and conditions in the entire Bay Area had become dangerous; a red flag fire alert had already been declared and at least eight other fires were burning in Northern California. The giant plume of smoke from the fire was visible from as far away as Santa Clara County, and day one saw no containment of it. Day two saw the fire grow to 500 acres in size, and by the end of that day it had stopped growing and the amount of smoke visible in surrounding areas was significantly less. At that time it had destroyed two houses, crept up to the southwestern edge of Fall Creek State Park, and even burned completely around Bonny Doon Fire & Rescue's Bonny Doon Station. 1700 people were evacuated from 1000 residences and businesses, and the following roads were closed: Empire Grade at Alba Road, Empire Grade at UCSC, Felton Empire Road at Smith Road, Pine Flat at Morelli Ranch, Ice Cream Grade at Pine Flat Road, Pine Flat Road at Ice Cream Grade, Pine Flat at Quail Road, and Pine Flat Road at Empire Grade. About 10 people evacuated from the fire area stayed over the first night at San Lorenzo Valley Middle School in Felton, which was the official emergency shelter provided. Day two saw the shelter move to Scotts Valley Middle School in Scotts Valley. Santa Cruz County Animal Services helped evacuate over 150 animals who had been left by their owners for one reason or another. In all, 11 homes were destroyed. Many residents of Bonny Doon believe the fire was started by people trespassing at Moon Rocks, a popular section of Bonny Doon Ecological Reserve that is closed to the public, but officials are still investigating the exact cause. The Martin Fire was one of three big fires that hit Santa Cruz County in 2008, which also included the Summit Fire and the Trabing Fire.