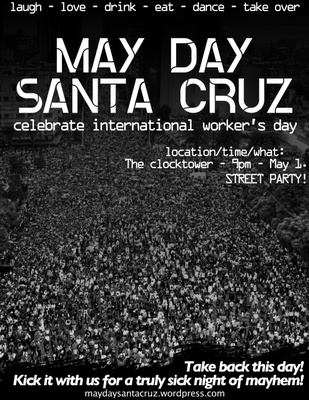 This flier declared, 'Kick it with us for a truly sick night of mayhem!' (From www.maydaysantacruz.wordpress.com)

On May 1, 2010 a May Day celebration in Santa Cruz turned chaotic; several businesses downtown were vandalized and stones were reportedly thrown at the police. The celebration was informally planned to begin at The Town Clock and other public areas downtown. It was anonymously promoted and city permits were not obtained prior to the event. Damage to businesses during the event include broken display windows at Dell Williams, Urban Outfitters, The E.C. Rittenhouse Building, and Artisan's Gallery; windows were shattered at Jamba Juice (in The Flatiron Building), and Velvet Underground; a fire was lit on the porch of Caffe Pergolesi; and "anarchist" graffiti was written on buildings. Two men were arrested for their participation in the event; 24 year old Jimi Haynes for felony vandalism and 41 year old Thomas Williams for obstructing the police and public drunkenness. The Santa Cruz Police Department later asked the FBI to help investigate the riot because of a possible connection to an anonymous local anarchist group (no one is sure who organized the event). Overall, damages to the downtown were estimated at $100,000.

Some fliers for the event were "reportedly" posted at SubRosa, and the event was also listed on Santa Cruz Indymedia as a 'Party/Street Party' to take place between '9pm and 6am', and the listing read as follows:

"May 1st is International Worker's Day! How appropriate that this year this day should fall on a SATURDAY. As we all know along with the 40 hour work week and minimum wage the weekend its self was created by and for working people in this country through long and militant struggle. What better way to celebrate than by dancing in the streets?

The event listing also lead to www.maydaysantacruz.wordpress.com where there were fliers available that people were encouraged to print and post.

As a result, council members announced that there would be city and police funds to assist damaged businesses, and it was announced that eight vacant positions with the SCPD would be filled at a cost of $1 million, while the City of Santa Cruz had a $4 million deficit. Mayor Mike Rotkin said a new tax might be necessary to fund safety measures. Diane Towns said she wanted to see surveillance cameras on Pacific Avenue. She was the owner of Velvet Underground, which went out of business less than a year later, but not due to the damage to her store which was only estimated to be $1000. City council member Ryan Coonerty said that installing more public cameras was a possibility.2

Immediately, the SCPD added an extra officer to the downtown beat, and officers already working the area were directed to increase their patrol frequency to increase police visibility.

SubRosa and the concept of "anarchy" received quite a bit of negative attention from the incident. A flier for the event was posted in their cafe, and news reports quoted as one of the criminal suspects as having worked at the cafe.

Defending themselves, the cafe released a statement: "This is a time for us all to band together, to show support and solidarity with each other in the face of a police state that has always blamed anarchists for everything destructive, while actively trying to prevent people from exercising creativity that would create alternatives to capitalist relations. The people who make this town a fantastic place to be are far more important than the walls and windows of businesses that suck our souls away for their profit."3

Later, the Santa Cruz Sentinel reported that SubRosa was raided for its "workers compensation papers" by law enforcement officers when the cafe was closed, but that was later disputed, and reportedly, only an investigator's business card was left with a neighbor after the "raid" of the cafe. As a non-profit, volunteer run space, they were not required to pay workers comp fees.4SubRosa's take on the "raid" was published on their website. 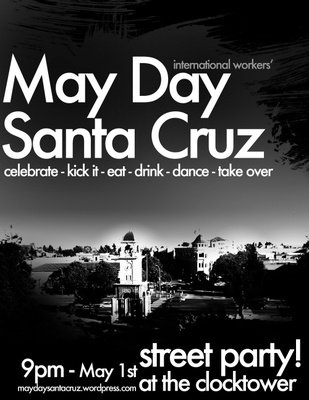