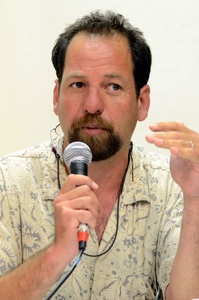 Posner at the Right to Vote on Desal candidates forum. Photo: September 2012.

Micah Posner is a 2012 Santa Cruz City Council Candidate. In 1993 and 1994 Posner served as the Bike to Work Coordinator. In 1994 he co-founded Pedaler's Express (PedX), a human powered delivery service, and he was one of the founders and currently sits on the board of the Hub for Sustainable Living,  which houses the Bike Church. He recently returned to PedX to help start a Pedicab Project –Santa Cruz Pedicab. He has been the director of People Power since 2002.

Posner has lived in the area since he first arrived here to attend UC Santa Cruz, where he graduated in 1991. He owns a home in the Lower Ocean district where he lives with his wife Akiko and two daughters.