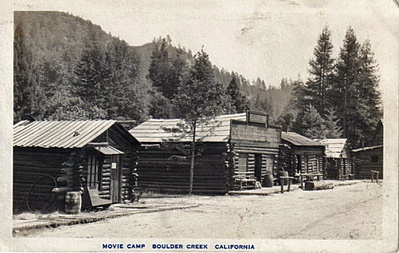 A postcard of a movie set in Boulder Creek in the 1930s, where there was a thriving movie industry at the time Many well known (and some not-so-well-known) motion pictures and TV shows have been filmed in the area. Add your favorite, and if you happened to have seen one filmed or were in one as an extra, please share some of your experiences here. Many silent movies and at talkies were filmed in Scotts Valley. The location at the Hunsacker Ranch on Glen Canyon Road was a popular spot