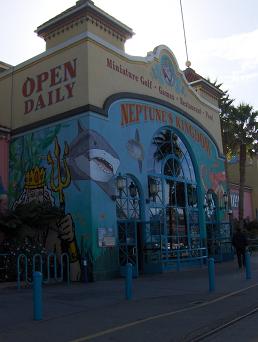 Entertainment features at Neptune's Kingdom include the Smuggler's Arcade, with pinball machines and video games downstairs, the upstairs' Captain's Game Deck with eight pool tables, air hockey, fosse ball, snacks, and beer, and Buccaneer Bay, a two-story 18-hole miniature golf course. The Barbary Coast Restaurant serves burgers, deli sandwiches, and espresso. Historically, the building used to hold a large indoor pool called the Plunge. This was also the location of the Water Carnival, where aquatic acrobats and "human submarines" would come to perform superhuman feats. However, in 1963 the building was repurposed and made into the a mini golfcourse, due to the declining interest in indoor swimming. In many ways the elimination of the Plunge marked the end of the Boardwalk's original purpose, since the site began as a bathhouse. In 1989, after the Loma Prieta Earthquake, the old miniature golfcourse was demolished and the entire facility was remodeled. Some of the older amusement machines still exist in the building, like the Metal Typer machine and the crazy mirrors.

Historic walking tour sign about the Water Carnival in The Plunge