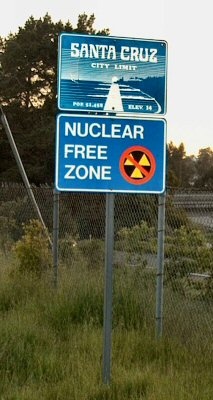 History The signs were targets of theft. Not for any political reason. It just looks cool to have a sign in a room showing the space to be a "NUCLEAR FREE ZONE."

By March of 2007 most of the signs saying the area was a nuclear free zone had disappeared. The signs cost over $200 each to install. The city has not been in any hurry to replace signs that do not affect immediate traffic safety. A few other signs have gone missing and not replaced (such as the graphic for "Geese Crossing" near the harbor area).

The nuclear free zone policy for Santa Cruz has caused the city to be mentioned in a few articles on no nukes. A photo of one of the signs appeared in the Journal of Atomic Scientists. Locally, the "fallout" from the policy on being a nuclear free zone has been met with indifference, pride and humor. ("In the event of a nuclear attack, those who bomb Santa Cruz are in big trouble.")