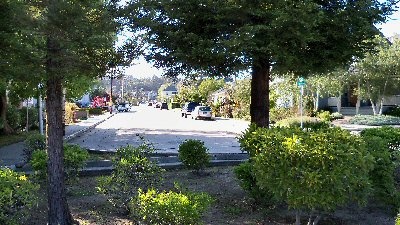 Olive Steet, seen from the blockade one block from Mission Street.

Olive Street starts at Mission Street and goes six blocks west to Escalona Drive. The road has a blockade near Mission Street. Olive Street is one way from the blockade to King Street,  Distance is about four-tenths of a mile. Olive Street has participated in Neighborhood Night Out block parties held in October.

No bike lanes. Traffic is light. Street is a gradual incline.

Olive street is blocked by a tree garden, one block up from Mission Street. After the blockade the road is one-way until King Street. (Traffic can enter from a side street on the west side of the blockade.) There are no olive trees on Olive Street. It was named for the surveyor of the area. Olive is a family name. 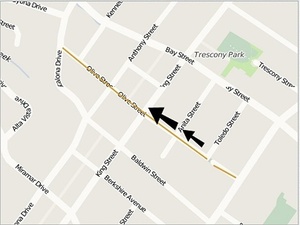 Olive Street is residential. Business is on Mission Street.