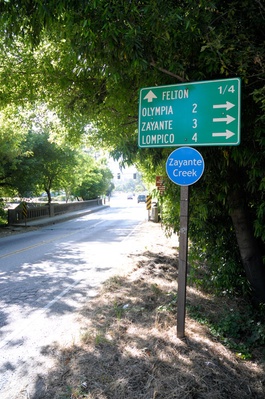 There isn't much there anymore, but Olympia remains on the sign on Graham Hill Road Olympia is a residential populated place located in Santa Cruz County at latitude 37.07 and longitude -122.059. The elevation is 367 feet. Mail to the area is addressed; Felton, CA 95018 and the area is otherwise considered a part of Felton.

No one is certain how the name Olympia was applied to the area in the mountains. The name was applied before the railroad went in. Olympia started as a lumber camp. The plan was to make it a place to load timber onto the rail cars. Thus, Olympia became a regular stop on the rails between Santa Cruz and Alameda. Rail service ended in the 1940's.

At the Olympia sand quarry, the fossil remains of an extinct sea cow were discovered in 1963. This 2,000 pound "Dusisiren jordani" lived about 10-12 million years ago in shallow near-shore waters. The fossil bones are at the University of California, Berkeley. Cast replicas of this ancient sea cow are now exhibited in a Japanese museum and at the Santa Cruz Museum of Natural History.

Olympia is residential. There are no services in the area. For practical considerations, Felton is the nearest place for services and shopping. There is a quarry in Olympia, that was used by at least two companies. There is no longer any timber or quarry activity.

Bus route 33 is the nearest connection. The railroad to the area ended in the 1940's.