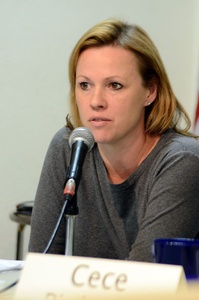 Comstock at the Right to Vote on Desal candidates forum. Photo: September 2012.

Pamela Comstock was a candidate for the  2012 Santa Cruz City Council   race and won a seat.  Her candidacy was endorsed by current Santa Cruz Mayor Hilary Bryant and City Council member Lynn Robinson.

Comstock attended Cabrillo College and she is currently the operations manager for Antares Audio Technologies, the high-tech firm that created the "autotune" sound in music recording. Previously, she owned a children’s clothing store in downtown Santa Cruz called Lollipops Boutique.  She has been a Santa Cruz City Commissioner for the Prevention of Violence against Women and she has served as secretary of a local Rotary club.

Comstock ran for city council in 2012 on an anti-crime, pro-business platform.  Even though technically TBSC claims not to make political endorsements, the reality is that since the TBSC leadership is all related, de facto support of Pamela's candidacy was a given.

Big business interests lined up to donate money to Comstock's campaign, including Charles and Tom Canfield, who own Santa Cruz Seaside Co., former council member Louie Rittenhouse, Redtree Properties' managing partner Doug Ley, developer Joe Appenrodt, Chamber of Commerce head Bill Tysseling, Lighthouse Realty President Peter Cook, Downtown Corp. head John Huffman, Sun Shops owners Marshall and Kathryn Miller, and philanthropist George Ow and family members. The City of Santa Cruz encourages council candidates to agree to a voluntary spending limit, which was set at $26,640.65 in 2012. Before the election in an October 27, 2012 article in the Santa Cruz Sentinel, it was reported that Comstock had already raised $36,205, which was $12,000 more than her nearest competitor in the race.

Comstock was listed as an admin of the closed (private) FaceBook TBSC group until recently. Perhaps the removal of her strong connection with TBSC is related to the publication of an April 10, 2013  Good Times article  in which a homeless man recounted a story in which he claims to have been repeatedly  harassed and photographed by TBSC members.  In a separate section of the article, Pamela is quoted as supporting a measure in which homeless people in Santa Cruz would have to sign a contract agreeing that if they are arrested or cited for an infraction by the police that they will automatically lose access to any city homeless services.  The measure as articulated by Ms. Comstock in the article wouldn't require a conviction or even a hearing in order for homeless people to be barred from Santa Cruz city assistance. A mere citation would suffice. It is interesting to note that in the city of Santa Cruz, it is illegal to sleep outside after 11 p.m., a time most humans tend to sleep. Currently, a violation of this sleeping ban results in a citation by police. There are relatively few beds available in actual shelter space for homeless people in Santa Cruz, so what Pamela Comstock is actually proposing may further penalize and marginalize people who already have fallen through any so-called safety net.

After a long study session on homelessness held by the Santa Cruz City Council on April 30, 2013, Comstock noted that funding for homeless services comes from increasing the tax base, and that the community should be focused on finding "smart solutions for shoppers" as a way to help the homeless, albeit indirectly. The phrase was a play on words that referred to a recently formed local organization called Smart Solutions to Homelessness.