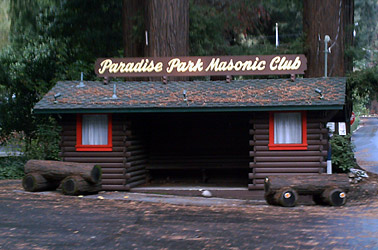 Paradise Park Masonic Club is an 138 acre property that lies about 1½ miles north on Highway 9 (River Street) from the Highway 1 intersection in Santa Cruz.  This privately owned land is jointly-owned by members of the Freemasons and the Order of The Eastern Star.  There are nearly 400 homes on the property, some of them occupied year-round; along with a number of historic buildings, a social hall, offices, picnic areas, tennis courts, and several other recreational facilities.

A group of Freemasons from Fresno purchased the land for use as a summer retreat to get away from the hot summer months in Fresno.  Inspired by the beauty of the area, they named it as their "Paradise" Park.

Back in the 1800's, prior to being Paradise Park, there were a couple of sawmills along the bank of the San Lorenzo River producing lumber from the trees around the area.  Around 1860, a man named Henry Van Valkenburgh bought some in the area and built the San Lorenzo Paper Mill to accommodate a demand for a lower cost paper supplier to the bay area merchants.

A few years later, California Powder Works was formed and started to produce blasting powder by 1864, in an area of land they purchased just north of the paper mill location.  By 1871, after a number of floods either severely damaging or destroying the paper mill, and the death of Henry Van Valkenburgh, led to the sale of paper mill's land to California Powder Works.  In the early 1900's, the duPont Company bought out California Powder Works.  Then they turned around and sold it to the Hercules Powder Company, which discontinued powder manufacturing in Santa Cruz by 1914, and moving the operation to the company's other plant locations.  Since they no longer have a need for the land, it was up for sale.  The Freemasons purchased the property in 1924. 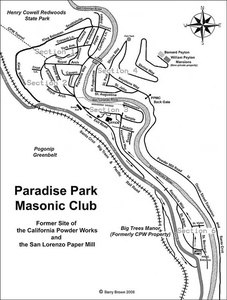 The Santa Cruz Metro no longer have service to this area.  The nearest location to catch the bus (Route #4) is at River Street & Encinal Street, less than a mile south of the entrance to Paradise Park Masonic Club on Highway 9.