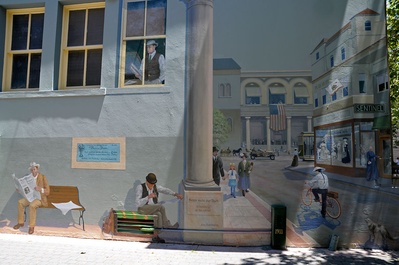 The People's Bank Mural honors the 100th anniversary of the building it is painted on, People's Bank. The mural features scenes and characters from the downtown of Santa Cruz circa 1911, including Tom Scribner playing the saw, Fred Swanton sitting on a bench reading the Santa Cruz Sentinel, and Josephine McCracken an activist and writer for the Sentinel, which was once located on Locust Street. Also depicted are Chinese immigrants, a reference to the past Chinatown on Front Street.

Artist Ann Thiermann researched the project, and the details in general are accurate with regards to the 1911 time period, except for the inclusion of Tom Scribner whose fame was of a later era.

Another fun touch is the painted third window added to the row of real windows on the building, and the man featured is William Weeks, the architect of People's Bank, as well as so many other iconic Santa Cruz buildings.

A reception celebrating the completion of the mural was held on Friday, August 5 at 6pm, and was a stop on the First Friday Art Tour. 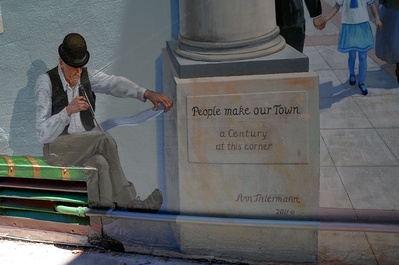 Tom Scribner, and the mural's inscription.