A Wikipedia entry has been started for Redman Hirahara Farmstead. Please check that page for more information on this important local historic site.

The house was built for James Redman in 1897. The architect was William H. Weeks. It is an  example of a West Coast Victorian farm estate home.

After the bombing of Pearl Harbor,  Japanese families in several states, were moved to internment camps. The Hirahara family maintained ownership of the house and lands.  This was due in part with assistance from people in Watsonville. After the war, the Hirahara family returned to the property.  During this period  the house and converted barn became an interim home for several other Japanese families while they reestablished themselves in the community.

According to their website:
"In late 1998, a group of Pajaro Valley residents formally formed The Redman House Committee to determine what could be done to save the once beautiful and elegant, now neglected and vacant, 100-year old Victorian house and to develop a new public use for it."

The Redman House was added to the National Registry of Historic Places in 2004. Salvage Archaeology was done in the summer of 2004. 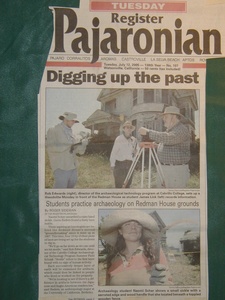 In February of 2005, the property was purchased by The Redman-Hirahara Foundation with borrowed funds for $1.9 million.

Redman House farmstead property was foreclosed on, in 2009.

In March of 2015 the land was purchased  by Elite Agriculture, an almond company based in Watsonville.