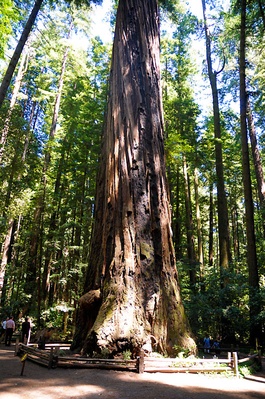 The coast redwood, known by the botanical name Sequoia sempervirens, is also commonly known as the California Redwood. It is the world's tallest tree - growing to heights more than 370 feet - can live for literally thousands of years, and is characterized by its bright red bark and wood. The redwood is also the California State Tree.

Sequoia is a genus in the cypress family Cupressaceae which contains the single species Sequoia sempervirens. Sempervirens is from the Latin meaning "always green" or "ever living" and the family name Taxodiacae is often called the deciduous cypress family. Sequoia sempervirens has two close relatives, the shorter but more massive giant sequoia (Sequoiadendron giganteum) grows only in California's Sierra Nevada Mountains, though it can be grown here as a non-native. The deciduous dawn redwood (Metasequoia glyptostroboides), is much shorter at 115 feet in height, and is found native only in one area of central China. The dawn redwood too can be grown here as a non-native and Big Basin has an area with all three types of Giant Redwoods growing next to each other near the visitor's center. The tallest known Redwood is currently Hyperion in Redwood National Park and it is 379 feet. The tallest Redwood in Santa Cruz County is the Mother of the Forest in Big Basin and it is 329 feet tall. The Father of the Forest, also in Big Basin is estimated to be over 2000 years old. In the Santa Cruz Mountains the best place to see the biggest trees are at the Redwood Loop Trails at Big Basin Redwoods State Park and Henry Cowell Redwoods State Park. In Henry Cowell Redwoods State Park the tallest tree is 285 feet tall and about 16 feet wide. The oldest trees in that park are about 1400 to 1800 years old. William H. Brewer visited the Santa Cruz Mountains and reported in Up and Down California in 1860–1864 that he found one Redwood that was “nineteen to twenty feet” in diameter. Redwoods sprout from seeds released by their cones, but the germination percentage is very low. They can also sprout up from and grow from their root systems, and when a tree is cut or burned, a "fairy ring" or "Redwood circle" can appear, which is a circle of Redwoods growing from the root system.

The name Sequoia sempervirens comes from Latin. The word semper is Latin for always, virens is a term for green (the tree is an evergreen). Sequoia is a Latin form of Sequoya the name of the Cherokee who developed an alphabet for his people. Joseph Decaisne, did not explain why he named the species in honor of the famous Indian.

Normal, green redwood foliage next to an albino