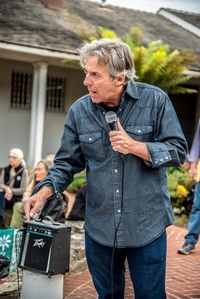 Richard Stockton performing at Santa Cruz City Hall during a rally to oppose the police purchase of an armored vehicle. Photo: March 24, 2016

Richard Stockton is a local writer, broadcaster, and comedian who stars in the Planet Cruz comedy night at Kuumbwa Jazz. He has appeared on the television shows NBC Friday Night, BET Live From LA, and Fondle The Fear, and has appeared in the feature film Love Da Money. His first book Fondle The Fear is now in its second printing.