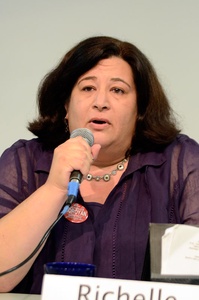 Noroyan at the Right to Vote on Desal candidates forum. Photo: September 2012.

Noroyan grew up in Santa Cruz and graduated from Santa Cruz High School in 1986. She earned her bachelor degree in political science at California State University Fresno. She currently works at UC Santa Cruz as the community relations representative of the Government and Community Relations unit.

After graduating from CSU Fresno, Richelle was hired by the Clinton/Gore campaign in 1992 to first set up and hold campaign opening events for several campaign offices in California's central valley. After that, she was sent to Los Angeles to lead on campus voter registration, outreach, and be part of a team that organized large campus events with Hollywood entertainers and high level political figures. For a few years after the campaign Richelle went on to be a paid staffer for several special and regularly scheduled elections throughout the state of California including the 1994 LA Mayoral election.

Her past work experience includes managing developer relations projects for both Apple Computer and SCO where she worked primarily with small software companies finding no and low cost co-marketing opportunities for them. She also traveled to hi-tech trade shows, both small and large, to recruit software developers to port their products to the Newton OS and at SCO to their UNIX operating system. In 2002, Caldera, the company that purchased SCO,  laid off many employees as Caldera slowly closed their Santa Cruz offices.

For two years, Richelle went on to work for two non-profits funded by grants from the state and federal government. She traveled the country attending education conferences explaining the successful outcomes of a 20 year research project that revealed particular teaching methods improved the academic performance of traditionally under-served students. This project, funded by the US Department of Education, provided very low cost in-service and pre-service training material for teachers, school districts and universities who wanted to adopt these teaching methods. President George Bush's administration made the decision to completely gut funding for this project. After this position, Richelle went on to manage the Tobacco Education Clearinghouse of California, a $6.5 million project funded by the California Department of Health to create educational and marketing material to warn the public on the dangers of tobacco products. She managed a staff of 11 people, including a team of librarians tasked with maintaining the state's library on the tobacco industry and anti-smoking material.

When she's not immersed in political campaigns, Richelle enjoys creating mosaic art for her friends and family, reading biographies and autobiographies, traveling with her husband Jim, spending time with her cats, staying in contact with her friends all around the world on Facebook, or playing piano.