Pinky in December of 2007, Downtown as usual Robert Steffen (aka Pink Umbrella Man) was born in 1965, and is one of Santa Cruz' all-time favorite Town Characters. During his heyday he would don pink women's clothing and makeup and then proceed to walk down Pacific Avenue very slowly. He did this six days a week! At the time, it was an event to spot him in normal clothes, and rumor had it he worked in IT during the day. He has been nominated locally for "Best Street Performer" in the past. He is also known as Umbrella Guy or Pinky.

What Robert did before he became "Umbrella Man" has been a topic of great discussion in town. Early on a myspace page was made with the name of Robert "Pinky" Valentino, but media outlets reported his name as Robert Steffen, and that page is said to have been the work of UCSC students.

Before his pink attire days, he dressed up in a garbage bag outfit, held provocative signs, and had presidential ambitions. Some believe he was a lawyer, others swear that he worked on confidential operations with NASA, as he himself has claimed in interviews. Steffen says that he worked for the NASA Ames Research Center as an Electrical Engineer. He quit because he "saw no point in building things if people didn't appreciate them."[2] Some say he lived among the homeless of Santa Cruz.

In 2008 Robert was seen less frequently Downtown, and some theorized this was due to the emergence of "Orange Guy" (who was interviewed by Bruce Bratton on Bruce's radio program). Presently, Robert does not dress up the way he used to, and early in 2009, in an interview aired on SoWat TV he said he was painting, and in August of 2009 Santa Cruz Weekly posted the links to Robert's Art Website (which lists his email address as mailto:[email protected]) and Robert's Twitter Page on their Facebook page. The Twitter page no longer exists. There is a new Robert Steffen page on Twitter, but it is unknown if that is really Steffen himself. Early in January of 2010 Robert announced he would be running for a spot on the Santa Cruz City Council in the November election [1], but later in the month he announced that he was withdrawing from the race due to personal health issues. [2]

In a 2013 interview at the Santa Cruz Farmers Market, Steffen said he was doing well. He said he was healthy and that he continues to paint and make art, "for himself." 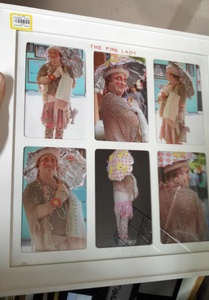 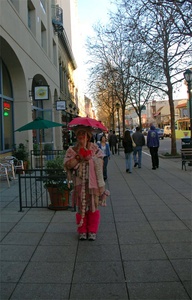 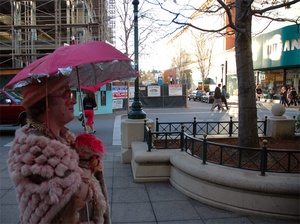 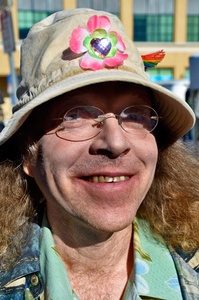 Someone add more about him if you have any information. — MishaNasledov

2007-08-15 17:00:06   This may be his Myspace: http://www.myspace.com/robertpinky. It has a recent picture of him sporting the pink attire as well as a pre-pink photo. It is unclear whether or not this myspace is run by Pinky himself. I saw him downtown and asked him if it was his and he shrugged his shoulders without a verbal response. Regardless of who runs the site, it is fun to see the love the fans of this man give him in the comments section. And as of May 2007, Robert or someone is selling merchandise, including "Pinky" t-shirts, which you can find at: http://www.cafepress.com/pinkyvalentino —AlexDarocy

As discussed on a Flickr post, Robert RUSSELL Steffen is on the Megan's law database. Robert FREDERICK Steffen, the pink umbrella man who worked at NASA and pays tickets in Santa Cruz, is not the same person.

Should we change the title at some point to reflect the name Robert Steffen? I'm not really sure how one would verify something like his name, other than asking him. —BenChaney