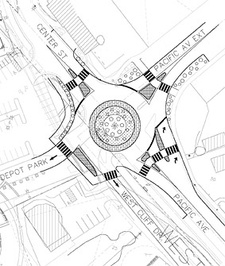 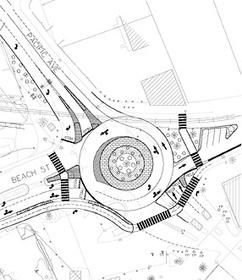 Modern roundabouts are designed to meet the needs of all road users—drivers, pedestrians, pedestrians with disabilities, and bicyclists by eliminating some of the conflicting traffic, such as left turns, which cause crashes at traditional intersections.  Because roundabout traffic enters or exits only through right turns, the occurrence of severe crashes is substantially reduced.  Small angle collisions that may occur as a result of a right-hand turn are typically less severe than that of other types of intersections.

Research in the U.S. and abroad has shown that roundabouts experience lower crash rates where roundabouts replaced traffic signals or stop signs.  A 2000 study by the Insurance Institute for Highway Safety and several other organizations evaluated 24 intersections in California, Colorado, Florida, Kansas, Maine, Maryland, South Carolina, and Vermont before and after construction of roundabouts.  The study revealed a 39-percent decrease in crashes, a 76-percent decrease in injury crashes, a 90-percent reduction in crashes involving fatal or incapacitating injuries, a 27-percent reduction in property-damage-only (PDO) crash rate, and pedestrian related crashes were reduced by 30 to 40%. 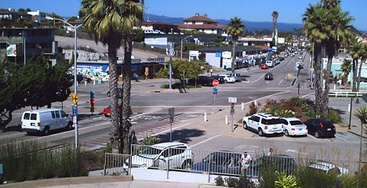 The first roundabout in Santa Cruz County was constructed at the intersection of Pacific Avenue / Center Street / West Cliff Drive / Depot Park.  Construction started in November 2010, and was completed in May 2011, with landscaping completed in April 2012.

The construction of the roundabout at the intersection of Beach Street / Pacific Avenue / Santa Cruz Wharf started on October 13, 2014.  As of May 22, 2015, most of the construction work is done, in time for the Memorial Day weekend traffic.  There will be several more weeks of work in order for lighting, landscaping, signage, and a little more concrete work, etc.

The long term plans for this area is to bring more tourists from the beach area to downtown businesses.  There is also the possibility of changing part of Beach Street (between Cliff Street and Pacific Avenue) from the current one-way, back into two-way traffic for better traffic circulation.  Another roundabout for the intersection of Bay Drive / High Street / Glenn Coolidge Drive (UC Santa Cruz main entrance) is in the planning stages. 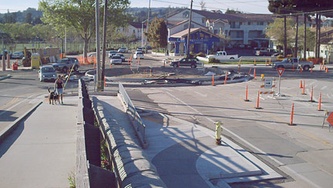 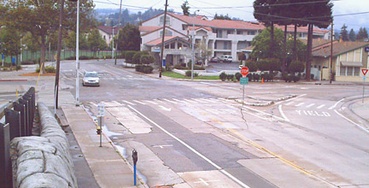 The construction of the roundabout at the Rio Del Mar Boulevard/Beach Drive/Esplanade/Aptos Beach Drive/Venetian Road intersection was completed in early 2015.

Capitola's first roundabout at the intersection of Bay Avenue/Capitola Avenue,is in the planning stages.

The construction of the first roundabout in the city of Watsonville, at the Pennsylvania Drive/Clifford Avenue intersection started on June 3, 2014, and was open to traffic use on August 15, 2014, even though landscaping was not completed yet.

On March 15, 2016, construction started on the Ohlone Parkway/Manabe Ow Road roundabout, which was completed in July 2016.

The city of Watsonville is also working with CalTrans to design a roundabout for the busy Main Street(Highway 152)/Freedom Boulevard/Western Drive intersection. 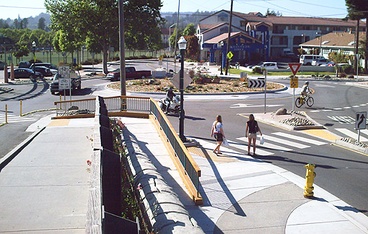