The logo of San Diego Federal Savings and Loan.

San Diego Federal Savings has as many as 63 branches in California. In 1985 the name was changed to Great American First Savings Bank. The bank was seized by federal regulators in 1991. The Santa Cruz branch closed in 1992 and the bank ended (state-wide) in 1994. The remaining branches were sold. Most were bought by Banc One Corp. The Santa Cruz location was not bought by any bank.

At The Town Clock there is a brick with "San Diego Federal Savings" showing that the savings and loan helped pay for the clock tower.

You can see a photo of the branch as it looked in 2012, at Former Bank Buildings. 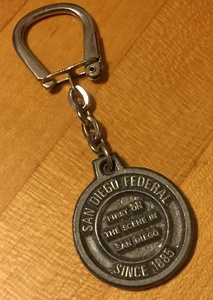