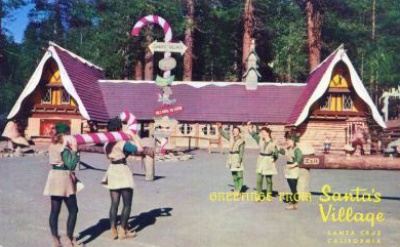 A vintage postcard from Santa's Village Santa's Village was a Holiday Themed Amusement Park that was open year-round, located in Scotts Valley on 25 acres just off of Highway 17 on Santa's Village Road. There were 3 Santa's Villages, which were the first franchised theme parks in the world, and the Scotts Valley location was the second of them to open, which was on May 30, 1957. The first official Santa at the park was Carl Hansen, and he was there for 8 years until he left to star in The Hocus Pocus show on television. At Santa's Village was Santa and Mrs. Claus, their elves and gnomes, who operated the rides, and a petting zoo filled with goats, sheep, bunnies, ducks, deer and a Mexican burro. Four reindeer pulled Santa's sleigh, and there was also a bobsled ride, a spinning Christmas tree ride, a train ride, a car ride, a giant Jack-in-the-Box, an Alice in Wonderland maze, a mirror maze, a giant Santa boot, brightly painted cement mushrooms, and a Queen of Hearts figure. The buildings looked like chalets with brightly painted colors and gingerbread style trim.

After the park was closed in 1979, the owner had the property protected by security agents and guard dogs for years, all to keep partiers and those still in love with the park out. Most of the buildings, rides, and fixtures are gone now, but a few decaying, old buildings remain fenced off. At some point the current owner was trying to develop the property as the site of 40 homes, but the status of that proposal seems stalled. There is a tribute website for the Santa's Village franchises at: http://www.santasvillage.net/ 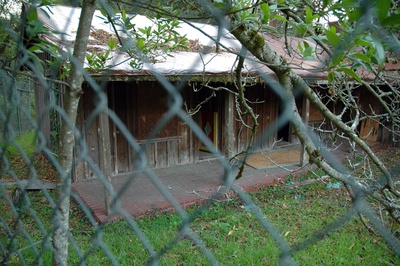 A few of the original buildings still remain, and can be seen on various history tours 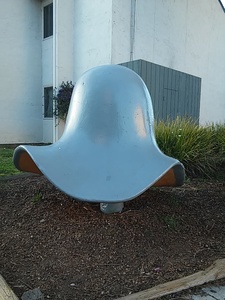 One of the remaining mushrooms, now located at Emerald Bay Apartments.

The reverse side of the park brochure 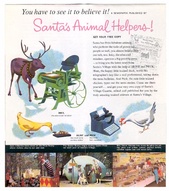 2012-02-19 22:29:02   Some of the chair-sized, painted cement mushrooms that the children climbed on from Santa's Village were at one of the Scott's Valley elementary schools 12 years ago. Brook Knoll, I think. I remember going to Santa's Village when my father was a shareholder, and the discussions when the shares went to 10 cents each after one of the other Villages went under. I also applied to work there, but was turned down because I was TOO SMALL to fit the elf costumes! (4'11") -Donna Wynn —24.20.15.42