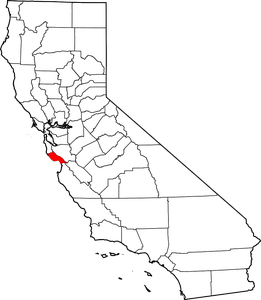 Location of Santa Cruz CountySanta Cruz has multiple meanings. You are probably looking for information on one of the following:

Santa Cruz as a place name was first given to a local stream in the area by members of the Portola Expedition in 1768 and it is literally translated as "Holy Cross." The name was concretely established by the Santa Cruz Mission which was built in 1791, though people simply called the areas we now call Santa Cruz, "The Mission" as opposed to "Santa Cruz" well into the 1850s.

Santa Cruz County was established as one of the original 27 counties when California became a state in 1850, and the area of Santa Cruz City was incorporated in 1866 as a town under the laws of the State of California. Its first charter as a city was in 1876.

The debate about what is authentically "Santa Cruz" must include a discussion of the local media. The Santa Cruz Sentinel moved their offices out of Downtown Santa Cruz in 2007, and their organization hasn't been locally owned since 1982. In addition to that, many of the top editors and writers at that publication, and some of the other 'local' weeklies, do not live in Santa Cruz County.

The Santa Cruz Mountains is a mountain range that extends from north of the Pajaro River to just south of San Francisco.

People in Santa Cruz use a variety of nicknames for themselves, including Santa Cruzans, Santa Cruzians, and Cruzers.

La Playa is the place to buy 'Santa Cruz' themed items; the Boardwalk, the Municipal Wharf, and Capitola Village also have those things.

Keep Santa Cruz Weird is one local effort to maintain the uniqueness of the area.

This is a disambiguation page — a navigational aid which lists other pages that might otherwise share the same title. If an article link referred you here, you might want to go back and fix it to point directly to the intended page.