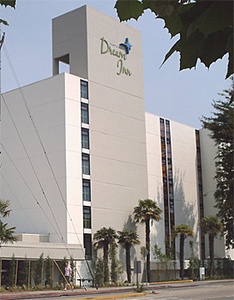 It was always known as the Dream Inn to the locals ever since the hotel was first built back in the early 60's. The 10-story tower was added to the original portion of hotel back in the early 70's. It was renamed the "West Coast Santa Cruz Hotel" when it was taken over by WestCoast Hotel Partners (part of Red Lions Hotels). The name was eventually changed to "Coast Santa Cruz Hotel" when Coast Hotels & Resorts of Canada took over operations.

The current operators of the hotel, Joie de Vivre Hotels of San Francisco, announced that they are changing the name back to "Santa Cruz Dream Inn" (the original name Dream Inn could not be used because of copyright issues) once remodeling is being completed and it is reopened on July 3, 2008, as a 165 room, 4-star hotel.