View of the Post Office Lobby in 2008.  Photo by John Pilge.

In January 2012, the annex was closed because the building was leased.  They moved the postal boxes into the other building and left the art. The landlord made no claims on the art.  The re-modeling crew found the paintings in the building in July 2012.  The crew boss made inquiries to find out if someone else wanted them, then eventually posted an ad on Craigslist, offering the artwork for free.  The Capitola museum have some of the images in storage. Parts of the mural were sold at auction by the Soquel Pioneer & Historical Association. 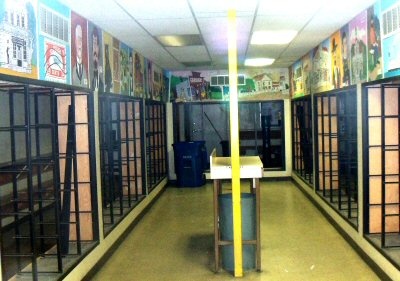 January 2012. After the boxes were moved to the other building.

The art included images of historic people of Monterey Bay. Center: Tiburcio Vásquez. Right: The pirate, Hippolyte de Bouchard .Cartoon interpretation of historical scenes of Monterey Bay history. Some of the people portrayed made history outside the county.

In January 2012, the lobby and service area were closed and moved to the former mail distribution area across the parking lot. (The tan building on the far left.)

Left to right: Daubenbiss house, inside a general store, view of Soquel Drive, Billy's Barber Shop, and part of the Odd Fellows building.