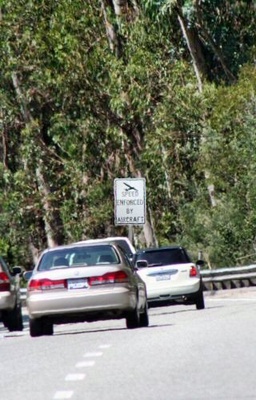 Going northbound on Highway 17, there is a sign just past the Pasatiempo over crossing. The sign says, "SPEED ENFORCED BY AIRCRAFT."   It is possible that aircraft are not regularly used for traffic control on highway 17. The end markers have not been found.

There  are similar signs on Highway 1 marking the area between the exit to  San Andreas Road and the exit to Watsonville Airport.

According to CalTrans:
The SPEED ENFORCED BY AIRCRAFT (CA Sign Code R48-2) sign may be placed, when requested by the California Highway Patrol, on sections of highway regularly patrolled by aircraft.

The signs in Santa Cruz is actually the older SR14(CA) sign. The newer R48-2 does not have an image of a aircraft.
(In 2003, several California road signs were considered obsolete and eligible to be replaced by the  newer signs as needed.)

In 1960 the California Highway Patrol started testing with aircraft for traffic spotting. In 1962 helicopters were added.  It wasn't until 1981 that aircraft were used in conjunction with ground units for speed enforcement and aerial observation.
The CHP has about 30 aircraft and by 2012, half were used for traffic control.

The pilot of the aircraft sees a marker on the highway. It is a thick white line near the "SPEED ENFORCED BY AIRCRAFT" sign. If the pilot sees a vehicle behaving dangerously or it is moves between the markers faster than normal, the pilot contacts an officer on the freeway and gives a description of the vehicle. The officer will then investigate.


Drivers caught by this method have tried the following defenses.
1.) Defendant has the right to face your accuser and only the ground officer is in court.
2.) Since the officer depends on the pilot's description, the evidence is hearsay and not admissible.
3.) Checking the car speed by timing past a marker is similar to a speed trap under CALIFORNIA VEHICLE CODE 40802(a) and thus illegal.