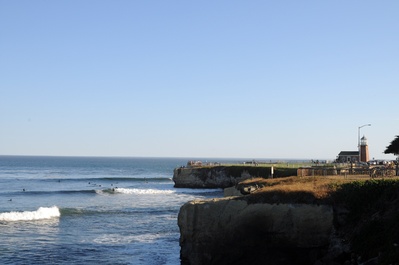 Steamer Lane is a popular surf area immediately to the East of Lighthouse Point, accessible by car from West Cliff Drive. Also known as Steamer's Lane, Steamer's, and The Lane, the surf tends to be best in this spot in the winter months when there is a strong, north swell.

Crowds often gather on Lighthouse Point to watch the surfers

The area the is one to two miles off the coast was busy with ships making deliveries between coast towns. This area of shipping traffic became known as Steamers Lane when most of the ships were steam powered. During a storm, the waves hitting the area near Santa Cruz Point (often called Lighthouse Point by locals) would start to crest as far out as the Steamers Lane.  The name was applied to the area of surf.