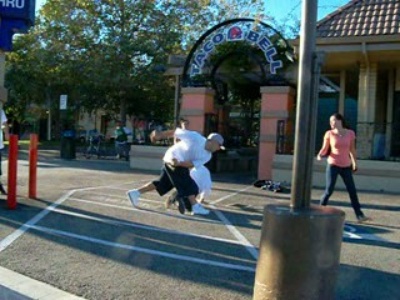 This fight — September 17, 2010 — lasted less than 20 seconds because people were yelling at the kids to stop fighting. The perception among community members that the rate of street crime had risen in recent years prompted the formation of several activist groups, including Take Back Santa Cruz and Peace On the Streets, whose goals, while approached differently, were both to address the various issues surrounding street crime. Reasons for this include a noticable rise in gang violence, represented by a rise in the reporting of stabbings and homicides in the local media, continued frustrations with issues surrounding homelessness, and frustrations with violent political activist movements in Santa Cruz, and a conflation of those movements with those who advocate to protect the rights of those wishing to gather in public freely.

In 2009 Take Back Santa Cruz staged 'positive loitering' events in an effort to reclaim crime ridden urban spaces. Their third positive loitering event in February of 2010, however, was met with a counter-protest1. The group continued on, and in a May 2010 Santa Cruz Sentinel article, they were described as surveiling the areas around Pogonip, Harvey West Park, and River Street, taking video footage of suspected drug dealers2.